The windows were open.  The early morning freshness was still in the air, the bush around us basked in golden light.  We had parked the camper-van slightly to the left in the small dirt road.  The only sounds inside the van were the bubbly voices of the kids playing on the bed close to the back window – we were just relaxing, drinking in the tranquil atmosphere.

There was a rustling sound of mopani leaves caused by oversized bodies moving around.  We could not see them, but we could hear them to our left.  The occasional branch snapping.  Loud deep rumbles every now and again.

She suddenly  appeared from the dense bush.  She was like a mountain, a giant, an elephant.  Her body language said: ‘I see you and I do not approve.’  She started crossing the road, right in front of us. All shapes and sizes followed: teenagers, adolescents and protective mothers with tiny babies.  Too close for comfort – thankfully the whole herd was in front of us, a quick retreat in reverse gear was an option if necessary.

Movement in the mirror!  A  bull elephant was approaching from the back, his large trunk slightly swaying as he walked.  He was in no hurry. He seemed completely relaxed.  As he placed one massive foot in front of the other he became bigger…and bigger…and bigger. He seemed to tower over us, his shape filling the whole back window. He tilted his head slightly, one large  eye looking through the window.

“It will be fine, just keep nice and still, he is just looking” I heard myself say.  The kids were amazing. Like little statues.  Not a blink.  He moved on – he had lost interest.

He appeared in my side mirror. He was slowly moving along my side of the vehicle.  He went past my open window.  He was less than an arm’s length away.  Lots of wrinkles, his  thick skin still covered by patches of dirt from an earlier mud-bath.

He disappeared behind the mopani trees.  The herd was gone too.  Only us again.

Wow!  What an amazing way to start the day…

Through squinting eyes I saw one of them low down on the rugged tree trunk close to my head.  I could almost touch it – intelligent shiny eyes looked back at me, the thick bushy tail flicking.  Since I made myself comfortable in the dappled spots of sunlight under the big Leadwood tree, the bush squirrels had been busy as usual.  Up and down, up and down they went.

The sand was extra thick in this area and felt soft against my back. I wriggled my toes.  I enjoyed the little streams of sand running between them. Shells of giant  African snails from long ago were  scattered around me.  They were white from exposure to the elements.  A pair of Namaqua doves were drinking water.  They were close, I could clearly see the bright bill of the male framed by his black face.

I closed my eyes again. It was the  perfect day to take it easy.  In the distance the Emerald-spotted wood dove was singing the saddest of songs: “My mum is dead, my dad is dead and all my brothers and sisters, boo-boo-boo…

My eyes opened with a start at the loud kok-kok-kok-kok of a Yellow-billed hornbill in the canopy above. It was much later.  The bright afternoon sun had been replaced by long shadows.

Then I saw them.  Warthogs.  A whole family drinking water – a mother with a row of little ones. Suddenly the adult stopped drinking.  She looked up.  I had been spotted.  They started running, podgy with short little legs, kicking up small clouds of dust.  I could see their tails erect like antennas before they disappeared into the dense vegetation.

I had to get going too, it was still a long walk home for a nine year old…

I opened my eyes.  I had gone from a deep sleep to being wide awake in an instant.  No traffic, no city lights … the silence was deafening.  I was wide eyed, listening.  Then I heard it – the huff huff huff of a jackal.  His mate answered in the distance.  Suddenly the night was filled with their loud mournful wails.  I was spellbound.

I threw off the thin sheet covering me.  It was a warm African night.  I sat on the side of my bed, my feet not touching the floor – I was six years old.  Bright moonlight was flooding through the window.  The deafening silence was back.  The floorboards creaked with every step as I approached the window.  I went onto the small balcony overlooking the stretched out African landscape.

The red sand was a dark grey colour.  The Acacia  trees were painted silver.  Dark shadows gathered under the trees – the moon almost blindingly bright.  The scene was surreal.  Sounds started to register.  The occasional  metallic ping of a bat.  The African nightjar far away, calling  “Good Lord deliver us”.  The rustling of leaves in the gentle breeze – I could feel the welcome coolness on my skin.

The jackals started calling again.  They were very close now.  I strained my eyes for any movement – they were playing tricks on me.  I thought that I could see fleeting movements in the shadows but when I looked intently they were gone again.  The only real movement was a glimpse of a barn owl silently flying past.

Back to bed, at sunrise I will be out there… 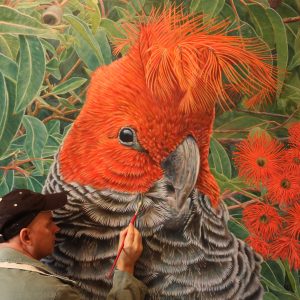 There is nothing that can be compared to a Gang-gang Cockatoo.  On the one hand they are stunningly beautiful, on the other hand they are a bit weird, a bit funny, maybe even a bit ridiculous with their strange little crests.  I painted the cockatoo before I had a background, and boy did I have a hard time finding a suitable background – a place where this unique bird would look at home…that was until I saw this tree, it was a perfect match!  To me even the crest and the flowers look the same.  Have you ever felt that you are at the wrong place at the wrong time?  That you do not fit in with the crowd? That everybody around you are large, sleek white cockatoos with long yellow crests and you are a little grey cockatoo with a funny red crest?  Maybe you are not weird but rather unique!  Maybe you should move on to where you feel at home, a place where even the flowers look like you…

The second challenge I had with this unique painting of a unique bird was to find a unique name.  What name could be more suitable than “μονογενής”? This word can be used in different ways but one definition is “pertaining to being the only one of its kind or class, unique and special”. 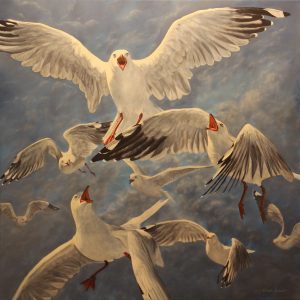 When I am spending hours working on a painting I often think about life.  These silver gulls always seem to be chasing after something.  When they get there they often find that there wasn’t much there after all and they start chasing after something else again – the cycle is endless.  It reminded me of the words of a very wise king from long ago.  He was talking about a lot of things in life that are worthless. “Chasing after the wind” he called it.  When you look at this painting you will see that these gulls are coming out of the darkness into the light.  When I noticed this I thought: Wow! If all our pursuits in life take us out of the darkness and into the light it is worth it all!  May we all stop chasing the wind and pursue the light… 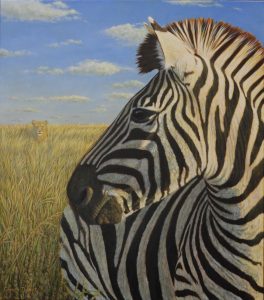 How close is too close?  I had the privilege to follow this magnificent stallion on foot on a crisp winter’s morning.  When I got too close he would lazily move away.  No stress, no excitement.  He knew exactly how far away is far enough and how close is too close.  I find it facinating to watch them do the same thing with predators.  To have the discernment to identify the lion in the first place and then the persistence in staying alert and to keep moving away is a wonderful ability.  I suppose that one person’s lion might look different from that of the next.  Should we get all worked up and stressed about everything that is out there or should we learn from the zebra and enjoy the lush grass and the early morning sun but make sure not to give any lion a place in our lives? 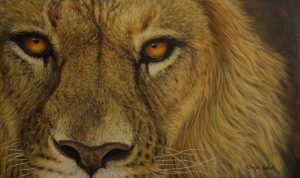 A lion’s eyes are designed to function in darkness.  Lions can move around with ease in the dead of night when we would be stumbling around.  When some animals are anxiously waiting for the break of dawn, they are out hunting, enjoying life, doing all the things that lions like to do.  “The eyes are the windows to the soul” or ” The eye is the lamp of the body”.  If we could always have the windows of a lion!  When people around us see only darkness, we would see some light!  When there is only gloom we could share the joy! “If your eyes are healthy your whole body will be full of light.”  May all our eyes be opened like those of a lion and may we be filled with light in the darkest of circumstances… 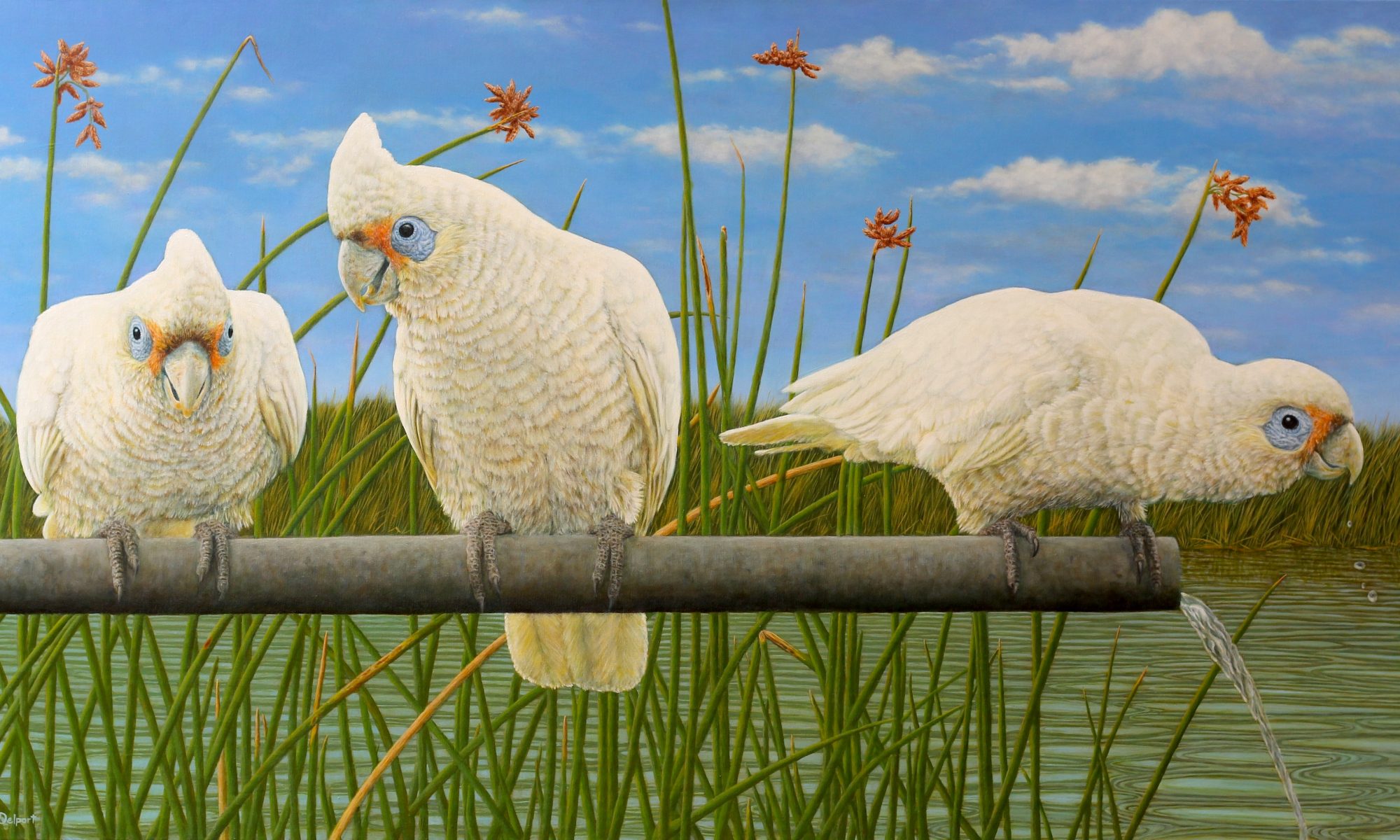 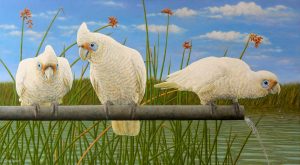 It was a beautiful morning.  There was a shower the night before and everything smelled fresh and clean.  I was surrounded by birds of all kinds of shapes, sizes and colours.  There was a midmorning excitement with lots of interaction, loud calls and greetings as birds kept on arriving from far-away roosting sites.

The large dam in front of me seemed to be the focus of it all.  The surface had a beautiful blue-green shimmer and everybody had their turn scooping up water to quench their thirst after the long night…maybe not quite everybody?

To my left were a few birds hanging around on a pipe coming from a windmill.  When the windmill started creaking and turning in the breeze the first bird shuffled to the edge of the pipe expectantly.  Suddenly there was a stream of crystal clear water gushing out from deep within the earth.  It was only then that I realised that they have been waiting for the wind to blow all along.  They wanted to drink from the source itself!  I have no doubt that the beautiful blue-green water from the dam would have been refreshing…but here were a few individuals that knew that there was something even better!

Christo – more about myself… 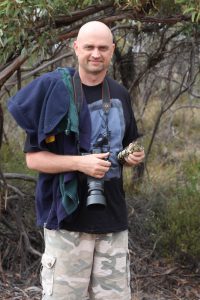 Spending hours in the African bush, the sound of hyenas at night, birdwatching at sunrise and painting a lion are some of my earliest childhood memories.

My fascination with nature and creating pictures eventually led to a career as a veterinarian that paints them when I’m not treating them. I use my own photos as a reference for my paintings. Wow! Just being out there patiently waiting for the right moment and then the adrenaline rush when I finally press the shutter – followed by the krrrr of high speed drive… When the brush hits the canvas artistic freedom rules. There is a point in the development of a painting when it develops a life of it’s own. When I stop looking at the reference photos and concentrate on the painting alone – that is when I know that I’m almost done. My use of oil on canvas is an attempt to capture a glimpse of the beauty around us. While painting, I also have enough time to ponder the deeper things of life. I paint in multiple thin layers, adding more detail with each layer. As the painting gets closer to the photorealistic effect that I aim for, my story about life becomes clearer as well.