The windows were open.  The early morning freshness was still in the air, the bush around us basked in golden light.  We had parked the camper-van slightly to the left in the small dirt road.  The only sounds inside the van were the bubbly voices of the kids playing on the bed close to the back window – we were just relaxing, drinking in the tranquil atmosphere.

There was a rustling sound of mopani leaves caused by oversized bodies moving around.  We could not see them, but we could hear them to our left.  The occasional branch snapping.  Loud deep rumbles every now and again.

She suddenly  appeared from the dense bush.  She was like a mountain, a giant, an elephant.  Her body language said: ‘I see you and I do not approve.’  She started crossing the road, right in front of us. All shapes and sizes followed: teenagers, adolescents and protective mothers with tiny babies.  Too close for comfort – thankfully the whole herd was in front of us, a quick retreat in reverse gear was an option if necessary.

Movement in the mirror!  A  bull elephant was approaching from the back, his large trunk slightly swaying as he walked.  He was in no hurry. He seemed completely relaxed.  As he placed one massive foot in front of the other he became bigger…and bigger…and bigger. He seemed to tower over us, his shape filling the whole back window. He tilted his head slightly, one large  eye looking through the window.

“It will be fine, just keep nice and still, he is just looking” I heard myself say.  The kids were amazing. Like little statues.  Not a blink.  He moved on – he had lost interest.

He appeared in my side mirror. He was slowly moving along my side of the vehicle.  He went past my open window.  He was less than an arm’s length away.  Lots of wrinkles, his  thick skin still covered by patches of dirt from an earlier mud-bath.

He disappeared behind the mopani trees.  The herd was gone too.  Only us again.

Wow!  What an amazing way to start the day… 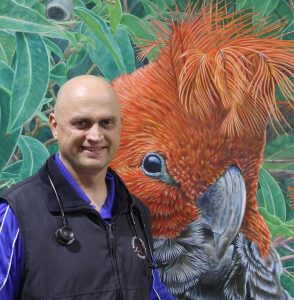 Spending hours in the African bush, the sound of hyenas at night, birdwatching at sunrise and painting a lion are some of my earliest childhood memories.

My fascination with nature and creating pictures eventually led to a career as a veterinarian that paints them when I’m not treating them. I use my own photos as a reference for my paintings. Wow! Just being out there patiently waiting for the right moment and then the adrenaline rush when I finally press the shutter – followed by the krrrr of high speed drive… When the brush hits the canvas artistic freedom rules. There is a point in the development of a painting when it develops a life of it’s own. When I stop looking at the reference photos and concentrate on the painting alone – that is when I know that I’m almost done. My use of oil on canvas is an attempt to capture a glimpse of the beauty around us. While painting, I also have enough time to ponder the deeper things of life. I paint in multiple thin layers, adding more detail with each layer. As the painting gets closer to the photorealistic effect that I aim for, my story about life becomes clearer as well.

All my paintings are inspired by the Lion of Judah, dedicated to his Father and created with the help of the eternal Spirit that guides us in all things…